Where players position themselves in attack – their alignment – depends on their abilities. Increasing the space between attackers opens gaps between defenders (if they are doing their job). But if the distance is beyond the passer’s ability to deliver the ball accurately and quickly, you are asking for trouble. Players need to learn their teammates’ abilities as soon as they can. Players also need to consider their own ability. For example, if they do not always catch/pass the ball with confidence, they shouldn’t position themselves too close to the defensive line.

Players taking up purposeful positions constitute a shape, and intelligently-crafted attacking shapes provide a wealth of options in attack.

Rugby players must practice their attacking shape against active defenders to gauge how they will best align themselves in a game. Enough depth is needed to allow players to receive the ball and still have enough space between them and the defence to think and act (unless they are being put into an open gap, of course). Playing too deep, however, give defenders time to adjust to attackers’ actions and the opportunity to catch them well behind the gain line. This cannot be learned when defenders in drills are static or the paramters of training games are unrealistic.

The traditional backline shape is a straight line angled at 45 degrees from fly half to winger. 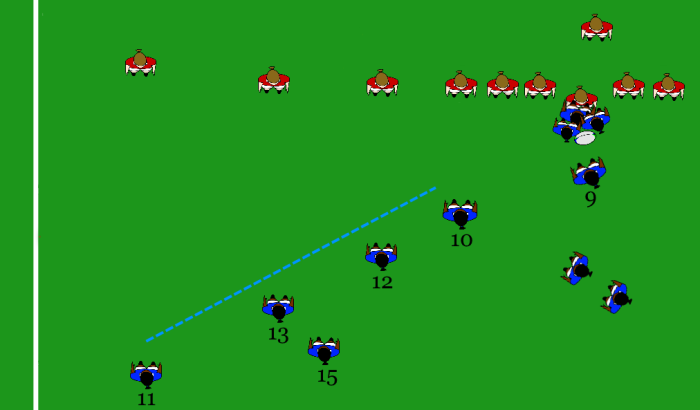 However, the outside centre and winger might want to align a little flatter, adopting more of a banana shape so they don’t have to cover so much ground when the attack starts.

Players not in this alignment, such as forwards or the full back / blind wing, can position themselves in supporting positions behind the front line, ready to strike as opportunities present themselves. The depth supporting players adopt also depends on defensive pressure and the plan of attack. They want to be close enough to run off the ball carrier or help in the tackle contest (usually different depths!). There are times that a supporting player is best being at arm’s reach but being too close can also confuse passers and make it easier for defenders to pick up the next threat. Again, it’s important to work on this in realistic contexts to develop a clear sense of what is the best depth for each possibility.

Too Flat:
· Defender has time to take away space
· No time to do anything – just crashes it up or runs sideways to avoid being tackled
However … playing flat with time to act keeps the tackle line forward and denies defenders time to adjust to the actions of the first receiver.

Too Deep:
· Defenders have time to read and adjust to what attack does
· If caught, usually well behind majority of supporting players
However … playing deep can allow attacking players to build momentum, get outside rush / umbrella defence, or exploit poor defenders who panic and rush out of line because of the distance between them and an attacker they perceive to be a threat.

As mentioned at the start, players should not place themselves wider than the comfortable passing range of the player inside them. This is fairly easily done at set piece, when a group of backs have time to take up purposeful positions, but adjustments need to be made during phase play when less-familiar players end up beside each other and as quickly as possible.

The attacking team’s alignment must be tailored to suit the purpose of the planned move or to preserve enough space for someone to operate. If the plan is to miss pass to the outside centre, both centres can start narrower than they would if the plan was to just pass through the hands. This would bring the outside centre closer to the passer and condense the defence – remembering that good defenders always mirror their opponents. With the winger positioned wider in this situation, the outside centre will have more space to take his/her defender on the outside.

When forwards are going to run off the fly half, backs might want to align themselves further away so that they can take advantage of defenders being ‘sucked in’ toward the tackle contest when the ball emerges on the next phase.

Generally speaking, effective defenders will align themselves on the attacker they are marking (if not square, on the inside or outside if they deliberately play a drift or blitz defence). If even one player is poorly aligned, it is worth scrapping complicated plans to attack this ‘easy space’. An individual not marking a player will have to waste time to re-adjust his/her body get into a good tackling position, if there’s even time enough to do so. This can, in turn, cause other defenders to step away from their commitments to cover their teammate’s mistake (real or perceived). If they do align properly, then they can be manipulated – moved wider or condensed together – to suit whatever the plan of attack is.

Alignment vs Static or Disrupted Defence

Every team should aim to use ‘quick ball’ – i.e. quickly recycled and played from the tackle contest before the defence has time to get organised and focused. When attacking against defenders who are not yet aligned / not paying attention / not ready to rush forward, they are said to be ‘on the back foot’. In such cases, attackers can afford to play a little flatter. Because it will take defenders significant time to adjust their bodies and get themselves moving forward, attackers will have a better chance of getting over the gain line. When defenders are aligned and on the ‘front foot’ (i.e. leaning forward on the balls of their feet, ready to rush up in defence), lying flat can present problems unless the fly half and supporting runners can astutely coordinate the timing of their passes and strike / supporting runs.

Even when defenders are aligned properly, their body language might not indicate that their full attention is where it should be. The most common scenario involves a defender who’s lined up opposite an attacker, but whose hips are turned inward looking at the ruck (even worse, with hands on knees as well!). When the ball emerges, they will have to waste time turning their hips and torso before moving forward. In this position they often don’t even know exactly where their attacker is positioned / coming from. This is a perfect opportunity for an astute fly half to shift his/her alignment into the gap between this and the next defender (the rest of the attacking team must also shift accordingly). The fly half needs to communicate to the scrum half their new position (Saying: “See [insert own name].” tends to work fine). As the ball is caught, the marking defender is now well out of position and forced to make a more difficult tackle. Often, the next defender steps in as well, recognising that the ball carrier has a clear hole, opening a new hole for the inside centre to exploit. Any player can exploit poorly-aligned defenders this way by shifting their own alignment before the ball is played.