Decoys and the Second Man Play

Decoy runners are players who make a run to look as if they’re going to receive a pass, but who do not. Their action, hopefully, draws a defender or two onto them, opening space for another attacker to exploit.

First off, it is vital that players acting as decoys DO NOT bump into defenders as they might be penalised for obstruction. Running for the rather than at a defender and being ready to step into space as defenders move, is a safe way to avoid this. A good decoy run should not need a ball fake, which can waste time the ball carrier needs to run / deliver; the decoy’s action should be believable enough for the defender to bite.

Attacking players should not act as mere decoys. Not only should their body language read: “I’m ready to receive a pass”, but the timing of their run should suggest it a possibility. Some decoy runners look the part, but are already ahead of the passer and running into gaps. Defenders will completely ignore them. This increases the risk to the next receiver, being deeper and with the potential to be caught well behind the gain line without adequate support.

A simple way of constructing a move that uses a decoy is to call the first and second receivers in an attacking unit ‘A’ and ‘B’, and the deep option tucked in behind them ‘C’. When ‘A’ receives the ball, ‘B’ and ‘C’ will essentially be traveling in opposite directions. Typically, ‘B’ goes first and draws in defenders with an unders line, with the pass going behind to ‘C’ in space. This is typically called a ‘second man’ or ‘back door’ play. 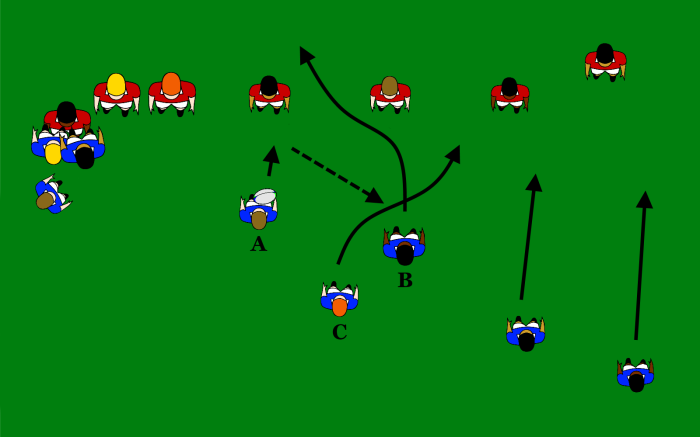 The move can be reversed as well, with ‘B’ running an overs line and ‘C’ coming in or holding a straight line.

Eventually, however, teams get used to this so it’s important not to be predictable. Playmakers should actually pass to the decoy from time to time – called a ‘short ball’ in rugby league. It’s often that this person has picked a good line behind the defender focused on the passer, so it can be a great first strike option to get over the gainline.

It is vital that ‘A’ keeps an eye on the defence and/or that the strike runners be honest when calling for the ball. The aim is to create a linebreak and this move has a high potential to isolate the strike runner. Even if a linebreak is achieved, the participants have must work hard to position themselves in good supporting positions as they will be the closest. The passer should not be doing so from contact and the decoy runner should not be running into defenders so there is no need for them to be tied up. It is also highly likely that ‘C’ draws the attention of defenders, opening space for other players, so teammates not directly involved in the move should be ready to link up. In fact, some second man plays use the ‘C’ attacker as the playmaker for a second attacking unit out wide rather than as a hard-charging strike runner.

It’s also important to consider: “Is it worth using decoys at all?” Are your players running convincing decoy lines? Are defenders really acting upon them? Are our deeper players getting caught behind the gainline despite decoy runs? Maybe it’s better to keep all players behind the ball and use the strike runners to have a determined go at the line with ball in hand and clever angles or to engage defenders further out and possibly set up supporting players with a late pass or offload, or even just to have bodies on hand to secure the ball at the breakdown and have another go on the next phase.