In playing aggressive defence, the shape of players rushing forward can influence what attackers do and steer them into areas that give us a better chance of a turnover. Flat Defence provides line integrity and evenly-distributed pressure, but different shapes can achieve more than just containment.

Umbrella Defence provides more intensity in front of the ball than flat defence, with flanking support a step behind to cover kicks and recover quickly after a tackle is made. It also makes it easier to stop linebreaks if the player in front of the ball carrier is stepped.

Drift Defence protects the inside and forces attackers to the touchline. Defenders align themselves on the inside shoulder of attackers and tempo their forward / outward pressure to encourage attackers to move the ball wide, away from their support. One can think of this approach as an Open Gate. Attackers are invited to move the ball wide, but the lateral pressure of the drift reduces their width as the ‘gate’ meets the touchline. Defenders either force the ball carrier into touch or trap him / her in a combined tackle. It also denies inside passes and cut backs. Some teams will elect to kick away at this point, so it’s important to have coverage either from a deep lying full back or a cross-covering scrum half or winger. It is also important that defenders not give attackers too much space on the outside or pursue too slowly as attackers might get around the corner on them.

Blitz Defence attempts to contain attackers close to the previous ruck. Defenders either align themselves square-on or on the outside shoulder of attackers and rush up early in hopes that interior ball carriers hold their passes. One can look at this as a three / four man Closed Gate denying attackers an easy chance to go wide. It’s higher risk because of the subtlety of timing and positioning, but it can be higher reward if your team has great poachers in contact or an eye for interceptions. It is important that defenders not rush up too far forward of the ball carrier or they will allow the ball carrier to run behind them or pass/kick over the top. As suggested by the name, a blitz defence advances very quickly but defenders must shorten their steps after the first few so they can adjust to sudden moves by attackers. It is also tricky to re-align after a tackle in a blitz defence because defenders have come further forward and have further to go to get back onside. It is vital, then that players making / contesting the tackle slow down play enough for their teammates to get back onside (if they do not win the ball, of course). Teams that blitz tend not to do so on every play, but pick the right time to strike. 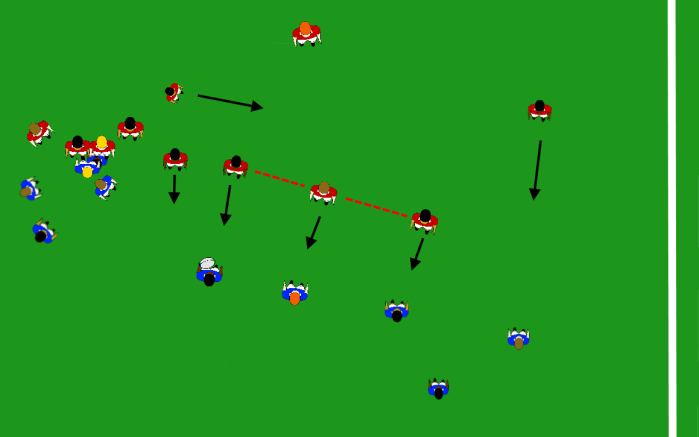