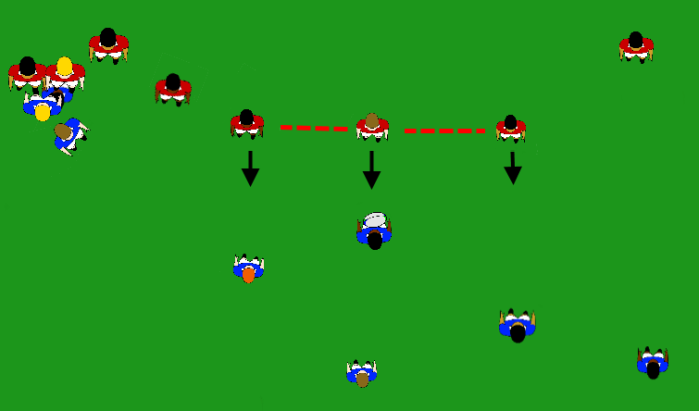 These players must stay ‘connected’ whether they operate like a gate that swings closed like in a Blitz Defence or one that swings open and ushers them toward the touchline like in a Drift Defence. If defenders lose this connectivity, attackers will easily pick holes to run through. 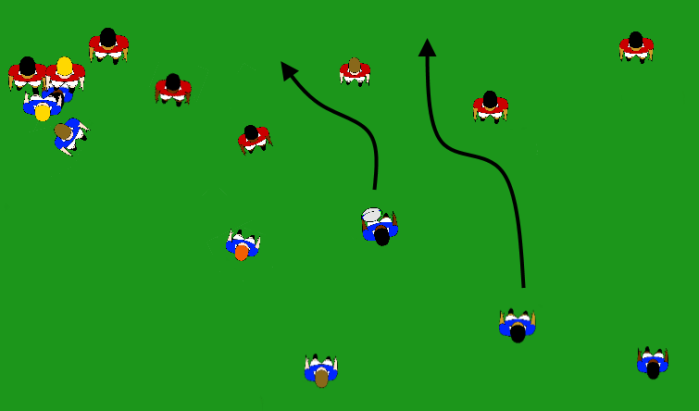 Defenders in this unit must also remain patient and hold their shape until the ball is tied up and there is no threat of a late pass or offload. If a defender pushes out or pinches in too early, they create a hole for an attacking player to exploit. 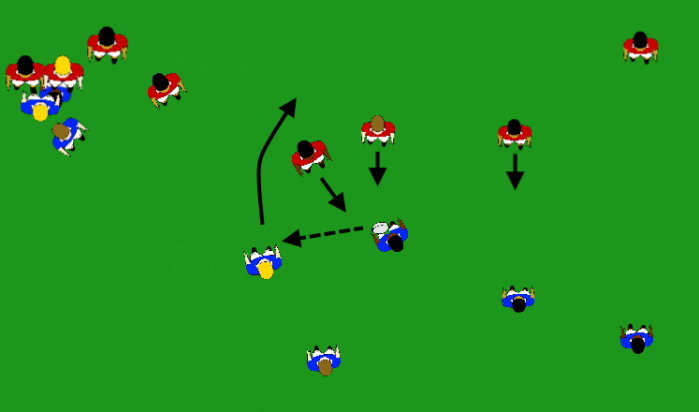 Interior defenders can start to think about leaving this unit once the player outside them has moved the ball. When this happens, it is highly unlikely that two inside passes will occur. Depending on the style of defence, the timing of the pass and positioning of defenders this interior player might want to call a push – telling all other defenders to move out one – or to wrap around and help in the wide channel. 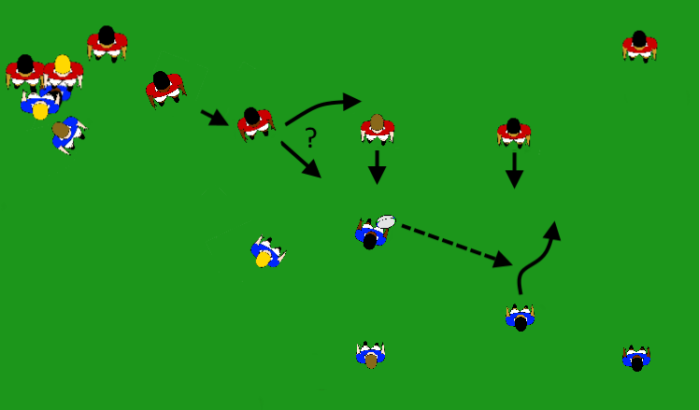 To provide even more focus for the defensive unit, each player can take on a more purposeful role than holding their spot in the line and attempting to win the tackle contest. Borrowing from the excellent NSW Rugby document “Effective Team Defence” from their Coach Education Series (2004), the following diagram lays out specific roles for those three players in front of the ball (at least) who are crucial to the integrity of our defensive line. 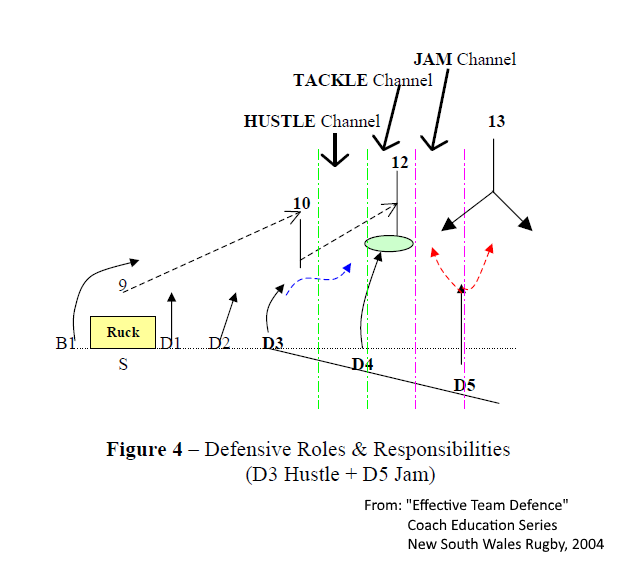 Before we even start discussing the roles, note how the diagram infers a slight stagger to the defensive line and how D3, D4, and D5 are aligned on the inside of their opposite numbers. This demonstrates a classic drift defence, which seeks to shepherd the attacking team to that imaginary, but vital 16th defender – the touch line. It’s lower risk than the outside-in “blitz” defence, but still requires much discipline should a dangerous winger get an early ball in space. But our hope is to shut down the attacking team at this midfield junction, and here’s how:

1. D3-D4-D5 are going to ‘attack’ as a unified defensive wall providing no clear holes to the attacking team. Obviously their roles, and the roles of other players in the line will change if the ball moves, but for this explanation, let’s assume that 12 is going to take the ball to the line.

2. D3 is in what the Waratahs call the Hustle Channel. By maintaining his line speed with the rest of his D4 and D5 team mates, he’s likely to force the attacking 10 to pass the ball on. He needs to maintain this position at least until the ball is passed again so there’s no chance a pass inside can breach the defensive line. In ‘hustling’ the ball away, he forces the attack wider, hopefully flatter (i.e. with less time and space in which to attack as they wish), and away from their source of support.

3. Let’s say that 12 has taken the ball to the line, and that D4 is going to at least wrap up the attacker. TRUST is incredibly important in maintaining line integrity. If D3 and D5 do not trust D4, then they might squeeze in to ‘help’ make the tackle, providing passing / offload opportunities to 12’s supporting team mates. At the point of contact, they must quickly scan and ‘mirror’ what’s in front of them to prevent the ball carrier from finding one of his support runners with a pass or offload.

4. If the tackle is going to happen here, D3 as the inside support player for D4 helps out or attempts to steal as the situation determines. If the attacking team gets a good placement, this player is likely the best person to contest the ruck. It is important that interior defenders start moving into position – holding, squeezing in on the ruck and wrapping or folding if they are needed on the other side.

5. D5 in the Jam Channel has to ensure that the outer support player is covered. Even when playing an inside-out defence, this player must still be SQUARE in both hips and shoulders with that person so that he isn’t able to beat D5 around the outside or get behind should a pass or offload occur. If the threat isn’t there, he can step up a bit in hopes of discouraging or intercepting an offload. If there are no opportunities to steal the ball and players are arranging themselves for the next phase, D5 takes the lead in organising the wrapping or folding of teammates.